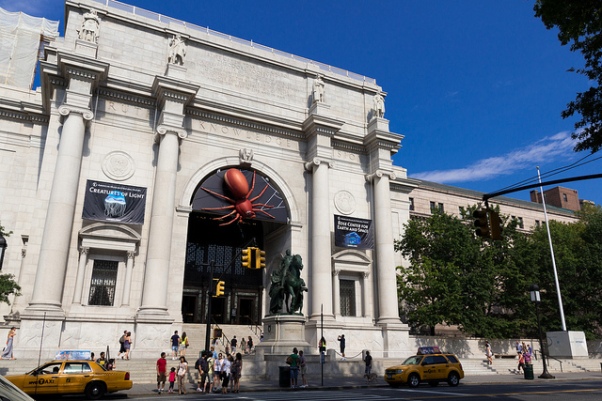 If you grew up within an hour-and-a-half radius of New York City, there’s a significant chance you had many a childhood field trip to the American Museum of Natural History (and the Bronx Zoo, and MoMA, and…I digress). Well, I certainly spent a lot of time there as a kid, and it quickly became one of my favorite institutions of all time. Who doesn’t love dinosaurs and planetarium shows and giant blue whales? And the gift shop, oh that gift shop, with its delicious freeze-dried neapolitan astronaut ice cream and stuffed animals as far as the eye could see. And when I went to college in New York, I continued to spend time in the museum for my classes. So you get it—I clearly love this place. Having spent dozens of hours wandering its many halls, I thought myself to be somewhat of an expert on it. But then I went on a Museum Hack tour, and realized I had barely touched the surface of what treasures the AMNH has in store.

As a student on a field trip, you spend a lot of time on tours of the museum. And they’re great! You learn a ton about the museum’s historic collections and its groundbreaking research. But Museum Hack flips the typical museum tour on its head. You still get amazing information about the museum and its collections—that is, of course, why you’re there—but Museum Hack takes the alternate route. The Route 66 to the Interstate, if you will, with all its quirky roadside attractions. (Quite frankly, the road trip metaphor is more than appropriate. The AMNH is a hodgepodge of 28 different buildings that have been added and connected over time, each with its own style of architecture and microclimate, just like the states along Route 66!)

A dinosaur at the museum! Photo: Don DeBold/Flickr

At the start of your road trip through the hallowed halls of the museum, you’re introduced to your fellow travelers through a simple icebreaker. For me, the thought of icebreakers brings back memories of awkwardly meeting people in your summer camp group. But Museum Hack tackles it quickly and easily—on my tour, it was your name, where you’re from, and your spirit animal. This works especially well at the AMNH, since there’s a good chance you’ll be able to see a taxidermied specimen of your spirit animal. Then it’s on to the show!

Despite my tour’s name, “The Un-Highlights Tour,” my group still visited some of the must-sees, but what you get is the behind-the-scenes, little-known, yet true stories behind them. For instance, the AMNH’s iconic blue whale was the center of a massive—and slightly terrifying—prank when it was installed nearly 50 years ago. (Want the whole story? You’ll have to take the tour.) You also get to see the infamous dinosaurs, and learn how to tell the difference between authentic bones and replicas. Spoiler alert: There are a lot of replicas.

But highlights aside, the tour also brings you to the corners of the museum that many people don’t get to on their own. Remember, there are 28 different buildings, and some of them are pretty hard to find. For instance, we were taken to the Gardner D. Stout Hall of Asian Peoples, where we looked at everything from dioramas of historic cities to ancient works of art to a drum created from a human skull (the wall text doesn’t mention that little tidbit, but our guide did!).

The famous blue whale at the American Museum of Natural History. Photo: InSapphoWeTrust/Flickr

There’s one final part of the tour that deserves a mention: the tour guide. Museum Hack tour guides don’t just love their museums, they’re obsessed with them. I mean, seriously, I’ve never seen as much passion for the AMNH’s taxidermic practices in anyone as I have in my guide, Evan! These keepers of knowledge (and herders of the crowd) are an endless source of entertainment, and while it’s fascinating to listen to their captivating monologues on the collection, they do make the tour interactive. In the dinosaur halls, we were given little dinosaur toys and tasked with finding their real-life (or replica) counterparts. In the Morgan Memorial Hall of Gems, we had to pick a gem we’d want to steal and tell the group what we’d do with it. (For context, there was an actual heist here in 1963, but don’t worry—the gems were recovered.) So you certainly shouldn’t expect a “stare at an object, hear a lecture, read some wall text, and repeat” kind of tour—and that’s what makes Museum Hack great.

All in all, Museum Hack tours are just pure fun for museumgoers, from the ones who already consider themselves experts (*sheepishly raises hand*), who will inevitably learn something they didn’t know before, to museum novices who have never once stepped foot into the institution. So in the wise words of my favorite fictional educator of all time, Ms. Frizzle, take chances, make mistakes, and get messy MUSEUM-Y!